For years, the Windows Subsystem (WSL) for Linux has made life easier for developers, system administrators, and hobbyists who have one foot in the Windows world and one foot in the Linux world. First released in 2016, WSL is a tool for using Linux applications, utilities, and Bash command-line tools right inside Windows and without the overhead of a virtual machine (VM) or setup. dual start.

Then, in 2019, Microsoft introduced an evolution of WSL: WSL 2. This new version of the architecture that allows the Windows Subsystem for Linux to run ELF64 Linux binaries on Windows uses a true Linux kernel, changes the way these binaries Linux interact with Windows and your computer’s hardware, while providing the same user experience as in WSL 1. WSL 2 offers much faster file system performance and full system call compatibility, allowing you to run more apps like Docker!

This new version of WSL 2 uses Hyper-V features to create a lightweight virtual machine with a minimal Linux kernel. Expect better compatibility with Linux software, including Docker support, and a dramatic increase in file system performance.

Over the years, WSL has received many updates. A major update added support for running Linux GUI applications through WSL. It brought features such as GPU hardware acceleration and audio/microphone support. A recent update to WSL saw the introduction of support for Systemd, after its creator, Lennart Poettering, joined Microsoft. Poettering, a 41-year-old developer based in Berlin, is best known for his work on Systemd, but other of his projects have also been widely adopted.

Systemd is the default system and service manager for most Linux distributions. But Systemd is also a very controversial init system. Criticisms of Systemd are mostly about feature creep, because the project would not conform to the do one thing and do it well philosophy of Unix systems in general. Other aspects, such as the use of binary logs (as opposed to human-readable text logs), have also drawn criticism. In addition, criticism has also been fueled by the discovery of “serious” security flaws. 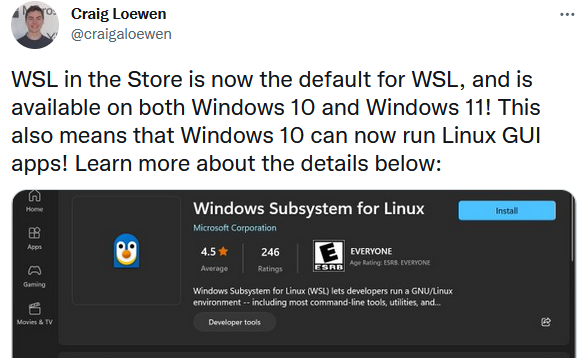 Through Craig Loewen, Program Manager of the Windows Developer Platform, Microsoft has made two big announcements regarding the Windows Subsystem for Linux. Not only is the app on the Microsoft Store the default version, but it’s also losing its Preview tag as it’s now generally available for Windows 10 and Windows 11.

The change means that Microsoft is discontinuing offering WSL as an optional component of Windows itself. The company says it brought the app to the Microsoft Store for Windows 10 users following community requests, pointing out that this means Windows 10 can now run Linux GUI apps.

Although the Windows Subsystem for Linux is now an application rather than a component of Windows, to use it you still need to enable the optional virtual machine platform. Microsoft says that although the app is now the default version, it’s still possible to visit the releases page on GitHub to see the latest versions of WSL and install them manually.

Today, the Microsoft Store’s Windows Subsystem for Linux (WSL) is dropping its “Prerelease” tag and becoming generally available with our latest release! We are also making the Store version of WSL the default version for new users running wsl –install and easily scalable by running wsl –update for existing users. Using the Store version of WSL allows you to get WSL updates much faster than when it was a Windows component.

In response to requests from the WSL community, WSL in the Store will now also be available on Windows 10 in addition to Windows 11. So Windows 10 users will also be able to enjoy all the latest features of WSL, including the systemd app and Linux GUI Support!

What’s new in the Store version of WSL?

As part of this release, we are also backporting WSL functionality to Windows 10 and 11 to make the Store version of WSL the default experience. These changes are:

How to get the latest generally available version

The easiest way to get all of these upgrades is to get the latest backport. Currently, it’s only available to Researchers and will automatically roll out to devices in mid-December. To get this update, go to Windows Settings and click “Check for Updates”. If you see a message that a new update is available, please install it. You will need to be running Windows 10 version 21H1, 21H2, or 22H2, or Windows 11 21H2 with all November updates applied. You will know you have this update when you verify that KB5020030 is installed on Windows 10 or KB5019157 on Windows 11.

Once you have the correct version of Windows, if you are a new user you can simply run wsl –install and you will immediately be configured to use WSL. If you are an existing user, run wsl –update to update to the latest version of the Store. You can always check if you are on the Store version by running wsl –version which will show you the version number and fail if you are using the Windows version of WSL.

Have you used WSL before? The first or the second version? What did you think of it?

If you used WSL 2, which Linux distribution did you try?

What do you think of Microsoft’s decision to offer this utility as a standalone app on the Microsoft Store rather than as part of Windows?

What do you think about the fact that Windows 10 can now run Linux GUI applications?