Microsoft has announced the general availability (GA) of SQL Server 2022, the latest version of its relational database platform. This release brings new integration with Azure Synapse, a data warehousing and analytics service that includes Apache Spark, and Azure Purview, for information classification and protection. T-SQL, the SQL Server query language, has been enhanced in this release with new JSON functions and AWS S3 API support enables scenarios such as backup and restore to AWS S3. Other important additions are also worth noting.

Kumar added: it allows customers to adapt in real time, add layers of intelligence to their applications, gain rapid and predictive insights and manage their data, wherever it resides. In a blog post on Wednesday, Kumar noted that the Azure integration also includes managed disaster recovery (DR) to Azure SQL Managed Instance, as well as near real-time analytics, allowing administrators to databases to manage their data assets with greater flexibility and minimal impact on the end user.

According to the company, performance and scalability are automatically improved with built-in query intelligence. Security innovation, which builds on SQL Server’s track record as the least vulnerable database over the past decade, continues with “Ledger for SQL Server”, which uses blockchain to create a tamper-proof time record of all changes made to the database. With Synapse Link, users can now run real-time analytics on their database without having to set up complex infrastructure.

Just tick a box and say, “replicate this data in near real time.” It lands in Synapse and you can have your Power BI report reading that data and that whole pipeline is just built for you,” Kumar said. And for companies that do have a hybrid setup, support for the Purview data governance service now allows them to define their policies whether the data resides in SQL Server in the cloud or on-premises. Apart from the cloud aspect, the team also improved the overall performance, stability and security of the database.

At the heart of that work, at least for this release, is the intelligent database query processing engine, which can now optimize queries in a number of more complex scenarios. Another cloud-related feature is an optional billing model based on Azure Arc. With an Azure Arc connection, which is now part of the SQL Server 2022 setup process, on-premises users can now opt into cloud-based billing to handle peak consumption or for ad-hoc use cases. 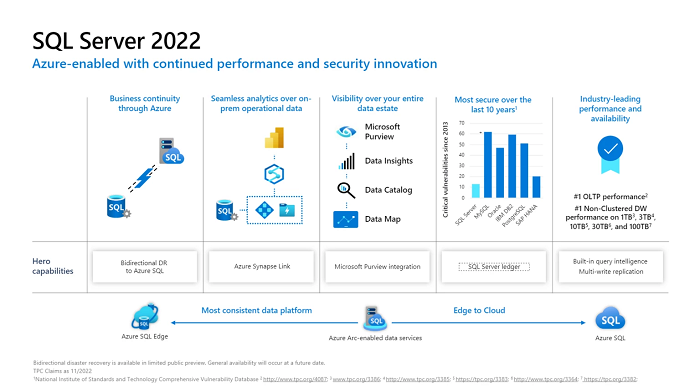 T-SQL, the query language of SQL Server, has been enhanced with new JSON functions, bit manipulation functions like LEFT_SHIFT and GET_BIT, time series functions, and a new IS DISTINCT FROM expression that simplifies marker processing “null” in Boolean expressions. The company announced that the Query Store feature, which captures query history and allows performance and query plan tuning, is now enabled by default, whereas it was previously disabled, as it may have a slight impact on performance.

Also noteworthy is the enhancement of SQL Server’s PolyBase, a data virtualization and big data connectivity feature, to be compatible with AWS S3 and all object storage systems that are compatible with its APIs. Here again, the “cloud” or “on-premises” paradox arises, because several storage platforms compatible with the S3 API, such as Minio, operate on site. Therefore, Microsoft is touting the new PolyBase as providing access to any data lake. This technology also allows databases to be backed up to S3 compatible object storage.

Ironically, however, PolyBase will no longer support connectivity to on-premises Hadoop clusters. But, as a result, PolyBase’s dependency on the Java runtime has been eliminated, raising the possibility that more customers will install it. If so, that would likely be good for SQL Server’s integration with the modern open source data analytics stack, much of which is in the cloud. As Microsoft pushes users to its cloud, it seems built-in functionality for things like analytics and reporting is giving way to cloud services like Power BI.

But these new services would cost more to customers. We continue to support what we have, but increasingly the capabilities in the cloud exceed the capabilities that are on-premises. For analytics and data lakes, customers are more willing to adopt the cloud. For operational data, for historical or compliance reasons, they still prefer on-premises for many workloads. “This approach is directly based on what we’ve seen from customer adoption and feedback,” said Asad Khan, vice president of SQL products and services at Microsoft.

Server 2022 adds support for important new cloud computing, database, and analytics technologies, while maintaining consistency and fidelity to the classic platform that boasts a large community of skilled professionals. Although Microsoft is interested in newer platforms, such as Azure Cosmos DB NoSQL, and support for open source databases like PostgreSQL, it does not want to abandon its investments in SQL Server. The market seems to reward Microsoft for this policy. It will be interesting to see what the 4th decade of SQL Server can bring.

What do you think of the changes brought by SQL Server 2022?

Microsoft is offering a release candidate of SQL Server 2022 to the Linux world, it includes features like Azure Synapse Link and Azure Active Directory Authentication

Azure is ahead of AWS in public cloud adoption, according to a report from IT management organization Flexera

Microsoft is finalizing plans to address unfair licensing issues in the EU, with new options to transfer licenses to a partner’s cloud