Microsoft has claimed that China’s offensive cyber capabilities have improved, thanks to a law that allowed Beijing to create an arsenal of unreported software vulnerabilities. China’s 2021 law required organizations to report security breaches to local authorities before disclosing them to any other entity. The rules mean that Beijing can use local search to accumulate information about vulnerabilities. A year later, researchers from the Atlantic Council found a decrease in reported vulnerabilities from China and an increase in anonymous reports.

On February 23, 2022, the world of cybersecurity entered a new era, the era of hybrid warfare, as Russia launched physical and digital attacks against Ukraine. This year’s Microsoft Digital Defense Report provides new details about these attacks and the increase in cyber aggression from authoritarian leaders around the world.

Over the past year, cyberattacks targeting critical infrastructure have fallen from 20% of all nation-state attacks detected by Microsoft to 40%. This spike was due, in large part, to Russia’s aim to damage Ukrainian infrastructure and aggressive espionage targeting Ukraine’s allies, including the United States. Russia has also accelerated its attempts to compromise IT companies in order to disrupt or obtain intelligence from government agencies that are clients of these companies in NATO member countries. 90*% of Russian attacks that Microsoft has detected over the past year have targeted NATO member states, and 48*% of those attacks have targeted IT companies based in NATO countries. 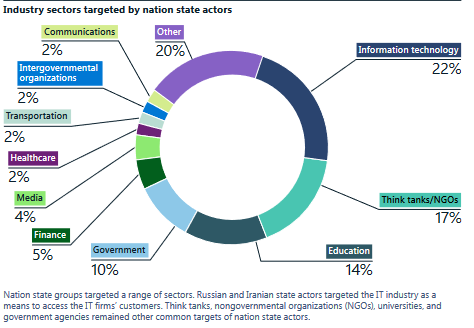 Russia was not alone in associating political and physical aggression with cyberattacks. Microsoft noted that:

The increased use of zero-days over the past year by China-based actors likely reflects the first full year of China’s vulnerability disclosure requirements for the Chinese security community and a major milestone in the use zero-day exploits as a state priority, Microsoft said.

Sent by Microsoft
Many attacks from China are fueled by its ability to find and compile zero-day vulnerabilities – single, unpatched flaws in software previously unknown to the security community. China’s collection of these vulnerabilities appears to have grown in the wake of a new law requiring entities in China to report vulnerabilities they discover to the government before sharing them with others.

While it is tempting to focus on nation-state attacks as the most interesting cyber activity of the past year, it would be a mistake to overlook other threats, especially cybercrime, which affects more users in the digital ecosystem as the activity of nation-states.

According to Microsoft, China has stepped up its cyber espionage and information theft attacks to counter US attempts to increase its influence in Southeast Asia.

The 114-page report details other tactics, such as China’s participation in foreign propaganda operations alongside Russia and Iran.

Microsoft has credited Russia with increasing the number of cyberattacks targeting critical infrastructure from 20% of all nation-state attacks it detected in 2021 to 40% in 2022, with most attacks being due to the fact that the Russia relentlessly targets Ukraine. Iran has also reacted to the deterioration in geopolitical relations by launching campaigns against US port authorities, in addition to attacks on Israel and the EU. Meanwhile, North Korea continued to steal cryptocurrency from financial and technology companies while launching attacks on aerospace companies and researchers. The hermit kingdom has also attempted to gain access to global news outlets.

Cybercrime continues to rise as the industrialization of the cybercrime economy lowers the skills barrier to entry by providing greater access to tools and infrastructure. In the past year alone, the estimated number of password attacks per second has increased by 74*%. Many of these attacks fueled ransomware attacks, resulting in ransom demands that more than doubled. However, these attacks were not distributed evenly across all regions. In North America and Europe, Microsoft has seen a decrease in the total number of ransomware cases reported to its response teams compared to 2021. At the same time, cases reported in Latin America have increased. Microsoft has also seen a steady year-over-year increase in phishing emails. While Covid-19 themes were less prevalent than in 2020, the war in Ukraine became a new phishing lure from early March 2022. Microsoft researchers observed a staggering increase in emails posing as for legitimate organizations soliciting cryptocurrency donations in Bitcoin and Ethereum, allegedly to support Ukraine.

Influence operations are a new section of Microsoft’s report this year due to its new investments in analytics and data science to combat this threat: We observed how Russia worked hard to convince its citizens, and citizens of many other countries, that his invasion of Ukraine was justified – while sowing propaganda to discredit Covid-19 vaccines in the West while promoting their effectiveness at home. We have also observed a growing overlap between these operations and cyberattacks.

In particular, influence operations use a familiar three-step approach*:

How do you read this situation?

Are you surprised to discover that Chinese law could be used to store and use security vulnerabilities for its own purposes?